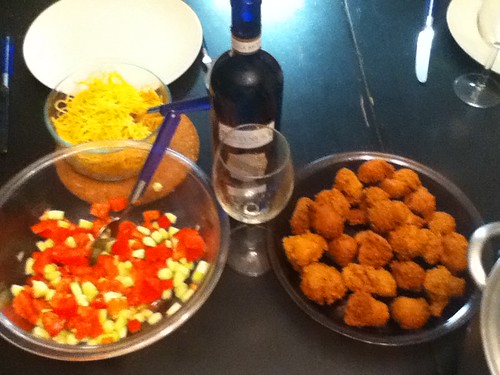 
When Elina looks up from her Blackberry with the news, I laugh and disregard it.

“No, really.” My roommate grabs for her laptop to read more. The BBC homepage confirms it. He’s dead. That elusive bearded sheikh who had terrorized our television screens, who had worn some sort of invisibility cloak in the caves of the east, whose hidden location had sparked heated debates among us schoolchildren: perhaps he was on an island in the Pacific. In a tiny Brooklyn apartment. Shivering in an igloo in Siberia. He had become for us a kind of Disney villain – and now, finally, in one fantastic, animated and soundtrack-enhanced scene, the good guys have caught him.

I hadn’t expected to especially care. After all, I had a polisci paper to finish that night; I have better things to do than dwell on the successful hunt for Bin Laden. It’s been years since the hunt for Bin Laden was at its height. Sure, that face had been a part of my childhood, the symbol of evil that we all had grown up with. Yet however we imagined the moment of eventually finding him, I don’t think we could have ever expected the national response.

As I stare at the word processor and the blinking cursor, trying to come up with a six-page paper on media bias, I get a text from a friend, Simi, Beacon editor and fellow journalism-major. “Going to Ground Zero nowww. Coming?”

The idea seems brilliant for a moment: I’d do anything to get away from this paper and anything to see a moment in history. But then I reconsider, assume my role as responsible college student, and tell her I’d love to but tonight’s just too crazy.

Two minutes later, another text: “Getting on train. Come NOW.”

Right. This paper could wait; this moment in history couldn’t. I throw on a jacket and drag Elina out, along with our friend Meredith, and we hop on the next 6 train going downtown to Wall Street.

The three of us are jittery, anxious to arrive downtown – there’s something about being young and hot-blooded and out at 1:30 a.m., I suppose. We’re not the only ones out, either. Groups of college students get on as we make our way down; two Indian students smile at us and ask, “Can you believe it?”

We laugh and say no we can’t. We continue to chat, trying to forget about the curious anxiety we feel as the train speeds across Manhattan. They look at the Israeli flag one of us holds, and one says quickly, “By the way, just so you know, we’re not Paki…we’re Indian.”

The train stops at Wall Street and the doors remain closed. We stand by the doors, waiting for them to open, as three young men wait on the other side to enter the train. They smile, we smile back. Finally the doors open and one of them lets out with a victorious yell, “We got him!”

The streets are jubilant; young people stroll as if it’s midday, singing and dancing. Every car in the city honks its way down Rector Street, windows open and music blasting. I’ve been in New York on Thanksgiving, Christmas, New Year’s. Days of major sports victories too. Yet never before have I seen New Yorkers so laid-back, so cheerful, laughing hysterically out of some morbid relief.

The street by Ground Zero is packed with thousands. College students, young professionals, not-so-young professionals, Marines, policemen, street performers, journalists, photographers. Every street lamp for several blocks has twenty-year olds hanging off of it. People have brought their drinks, total strangers toast each other with tears in their eyes. A woman next to me holds a portrait of a loved one killed in the Towers, a candle flickering in her left hand.

Yitzhak Bronstein, a student at YC who was also there, added. “It’s a healthy reminder of a
simple point that we all too often forget,” he said. “Namely, that the United States is founded on a values system which ensures the right to life, liberty and the pursuit of happiness, and that it is not something to be taken for granted.”

I find Simi later, flushed with excitement. She had been photographed by several major news outlets and interviewed in The London Telegraph. “For that one night, all night, I felt proud of America,” she tells me. “And proud of my fellow citizens. I sang the National Anthem until dawn with thousands of other joyous New Yorkers, and I won’t forget that feeling for years to come.”

It’s true. The victory euphoria is so strong that I’m already imagining telling my children about this night. As I stand there at 2 a.m. by Ground Zero and the construction cranes overhead, I’m flooded with images from my own childhood, rather unwanted. My tenth birthday party in school, thirty girls standing in a circle around platters of cupcakes in our Hebrew classroom. And then an urgent call for assembly, and strange words coming out of the rabbi-principal’s mouth – downtown Manhattan, terrorists, towers. What?

That was the last time I actually celebrated my birthday. I had been sure it was some inherent evil in me, some awful sin which I had committed. The terrorists had come specifically today, on my birthday, because I had been a bad girl. I had disrespected someone, had bad concentration during prayers, hadn’t helped enough at home. My very-pregnant mother had tried her best to console me, yet even the grown-ups were too stunned. That evening I had spent sitting on the stairs, wrapping my schoolgirl braid around my fingers, crying to myself without even fully grasping what had happened. My notebooks from those days are full of newspaper and magazine clippings: a child’s feeble attempts at coming to terms with evil.

Almost ten years later, and the middle of the night, and now I’m watching a young man unfurl an American flag above us.

An image: Nighttime in downtown wintry Manhattan. A ten-year old girl in a wool coat, with a long braid, walks up to the fence surrounding Ground Zero. Next to a flower wreath, she tacks on a large American flag poster, colored in crayons and covered in signatures. She had gone around her school and collected hundreds of names. On the top, in childish script, in English and Hebrew: “God Bless America.”

And now I’m nineteen, standing by that same fence outside Ground Zero, on the night of Bin Laden’s death. A group of Marines embrace each other next to me, singing the anthem and laughing.

It’s not even Osama’s death which I care about – that’s not why I’m here. Perhaps it’s just a sense of hope, excitement for a future in which it is possible for the good guys to win. In which all of New York City will come out in its pajamas, wide awake, ready to comfort the grieving child inside.